We were almost there.  Horse shows and livestock events came back roaring across the state of TX.  You could get out and about, if you just kept six feet between you and strangers not with your party.  Offspring, Darling Husband, and I actually enjoyed a fun filled Saturday of the Texas Longhorn Breeders Association Show and the Senior Pro-rodeo roping event at the Bell County Expo center.  It looked like there might actually be a 4th of July parade and celebration of some sort.  Of course, allowing the world to go back to normal after months of hysteria, could not be allowed.  It was nonsense to even think it. 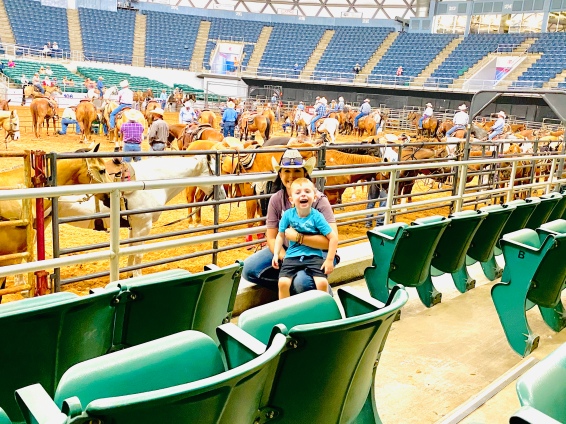 Even though the science behind the virus transmission has not changed (the virus is mainly transmitted in aerosols so tiny they pass right through mask material), and the fatality rate of the virus is decreasing exponentially every day, those with a vested political interest in maintaining the hysteria began focusing on the increase in case numbers, which experts knew/accepted would happen months ago.  Even me with my bachelor of science in Animal/Vet Science could have told you that.  It’s epidemiology/immunology 101.  The media and government health agencies began ignoring the decrease in severity, because it contradicted their fear mongering.  The alarmist drum to perpetuate the fear of illness beat steady through early June, until most government leaders caved to the pressure and our rights were revoked once again.  Fourth of July activities/celebrations were cancelled, beaches were closed, and a mask mandate was implemented to suck out the enjoyment of any public celebration.  God forbid you let people make decisions for their own health.  Scared?  Wear a mask, maintain that six foot distance, and stay home.  Courageous/refuse to indulge mass panic?  Go on with your life and accept the consequences if you succumb to a virus with a 99% survival rate.

Allowing the government to prohibit you from celebrating the Fourth of July, is kind of missing the whole point of Independence Day.  Don’t get me wrong, I understand the Chamber’s position.  When you are trying to keep your job, worried about getting re-elected, and/or avoiding a lawsuit when people refuse to take personal responsibility for their life choices, going against the constantly changing panic narrative is probably not in your best interest.  Even though the CDC has directly contradicted itself multiple times during the whole pandemic, if you aren’t a medical doctor it’s hard to take an anti-establishment stance, unless you are Scott Cain, the mayor of Cleburne TX.  That man chose love of country and courage.  I’d vote for him if he were to aspire to a higher office.

Despite everything that has happened in this country over the past month, despite the constant anti-American sentiment that permeates the media on a daily basis, there are still those that love the United States and believe this is the land of the free and the home of the brave.  Immediately after it was announced that Belton TX, would not hold their historic 101st July 4th parade, a brave, determined citizen decided to organize a community parade without the support of the Chamber of Commerce .  It would be an enter at your own risk type of event.  She created a Facebook event, checked the applicable laws, and advertised in various publications.  The local news channel ran a story about her efforts a week before the parade. 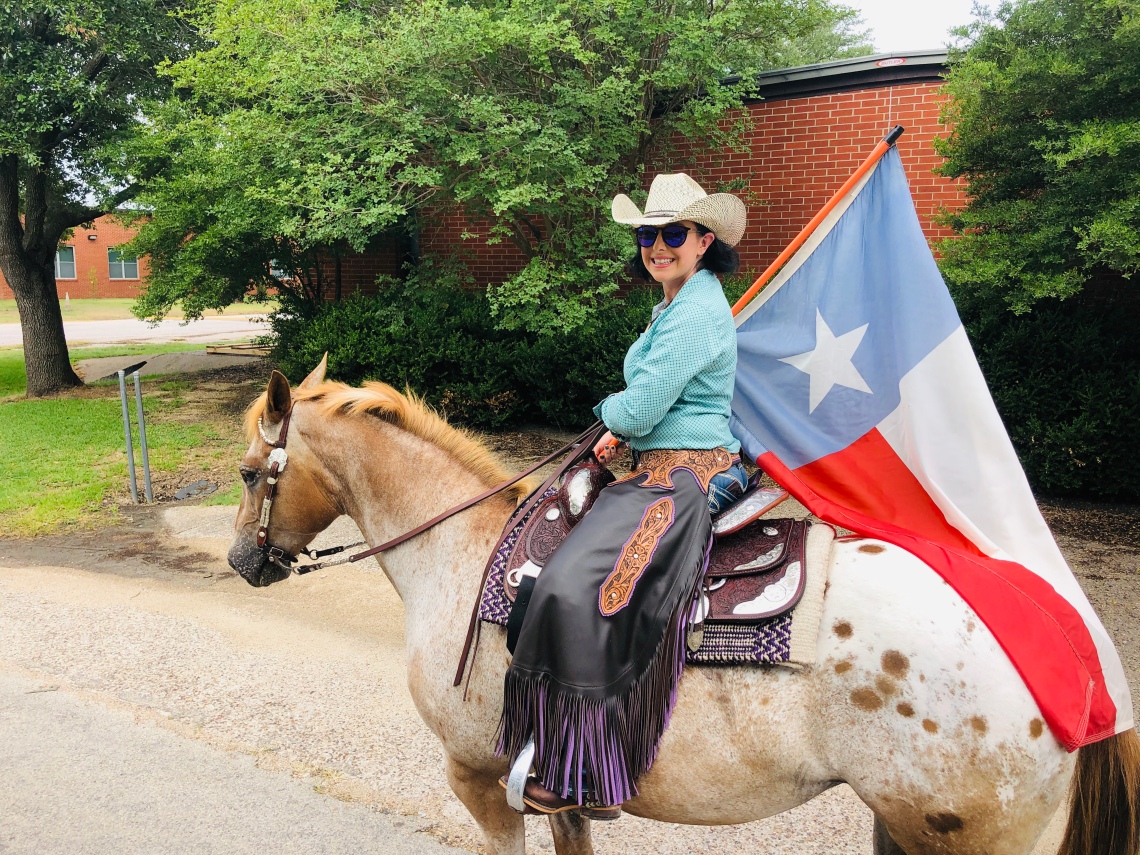 Another friend of mine also, came up with the idea of the “Pop-up” parade, where she would show up with her horses, anyone brave enough to ride with her, and ride the parade route on the day the event should have taken place.  It may not have a large following, but the idea was a good one.  With every single horse show/activity on my calendar going virtual or being cancelled completely, the idea of “Renegade parades” was too tempting.  After all I’m not super competitive. I’m not exactly an “In it, to win it” equestrian.  It’s more of a do better than last time, compete only against yourself, see if your progress at home translates to progress in the show ring type of endeavor.  Grooming my horse, throwing on blingy tack, and dressing up is my favorite part of competition anyway.  The pop-up parade was a great way to combine all of that without any performance stress or anxiety! 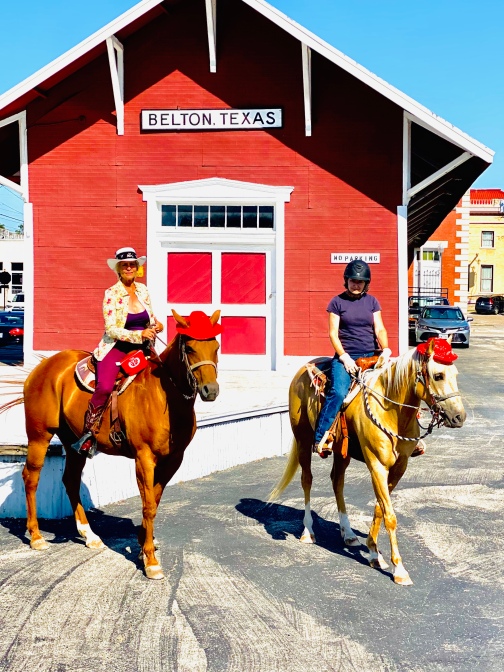 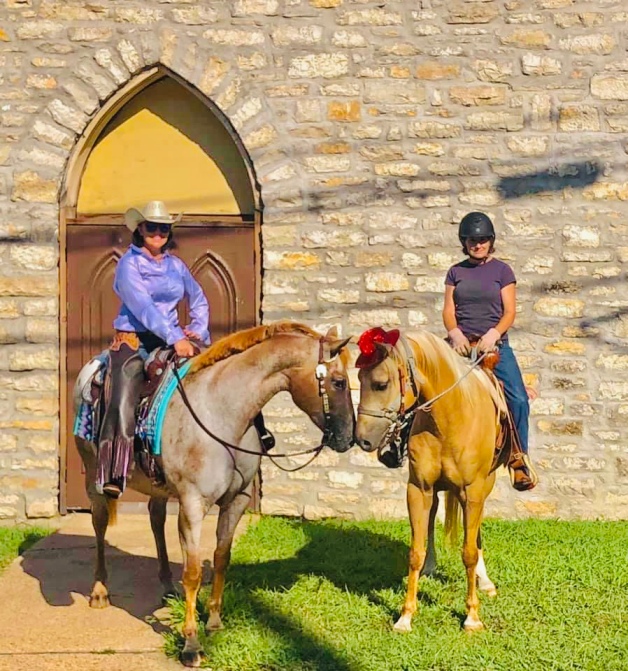 I immediately and enthusiastically signed my pony and Offspring up for the July 4th Citizen’s parade.  Since my new custom made chinks were languishing in my closet without a single opportunity to debut them, I enlisted my “game for anything” Appaloosa mare, Odessa for my friend’s “Pop-Up” parades.  She just looks so good in western tack.  For three weeks leading up to the 4th of July, Odessa and I met my friend for rides throughout small TX towns, sometimes with flags.  We chatted with locals and waved at passing traffic, and all of it gave my horses a nice break from arena work with the added benefit of desensitization.  At this point it had been nine months since our last show, six months since the last parade, and I was looking for any reason to get off property with the equids! 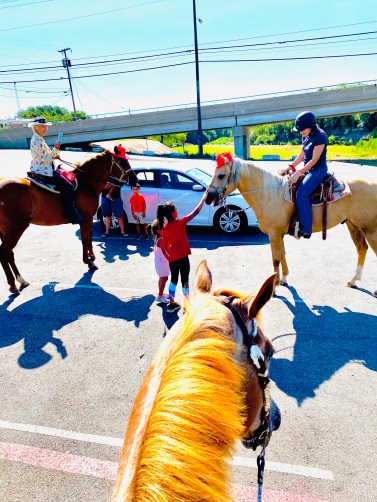 My little stallion Beau Pony was unfairly denied entry in the 100th Anniversary Belton 4th of July parade last year.  You can see this post for the details behind that disappointment.  I honestly thought Beau would never have the opportunity to participate in the Belton 4th of July parade, but the Chamber sponsored virtual parade, and more importantly the Citizens’ Parade were the perfect opportunity to right that wrong.  It was almost cosmic how the universe aligned.  Karma took over, and the pony that wasn’t allowed to participate the year before, led the 101st Belton 4th of July Parade as Grand Marshal when the Chamber couldn’t/wouldn’t step up.  The show must go on, and the organizers of the Citizens’ parade did a wonderful job of ensuring the tradition did not die this year, regardless of “the Covid.”

Beau Pony had spent the past year breeding and challenging any full size horse that stepped up to the fence that divided him from his much larger neighbors.  He put so much effort “protecting” his girlfriend from other male (gelding) competition running back and forth along the fence line, that I’m pretty sure he was in the best shape of his little pony life at the ripe old age of 18.  I squeezed in a few quick drives to make sure that he remembered what was required when hitched to the cart, and didn’t behave like a total fiend.  We tested out his behavior filming our virtual parade entry in downtown Belton a week before the parade in full traffic.  I practiced my draft plaits a few days before the Citizen’s parade, and with a whopping five drives in the past twelve months under his belt (or should I say girth?) Beau Pony was plaited, harnessed, and ready to play Grand Marshal for the 101st Belton Fourth of July parade. 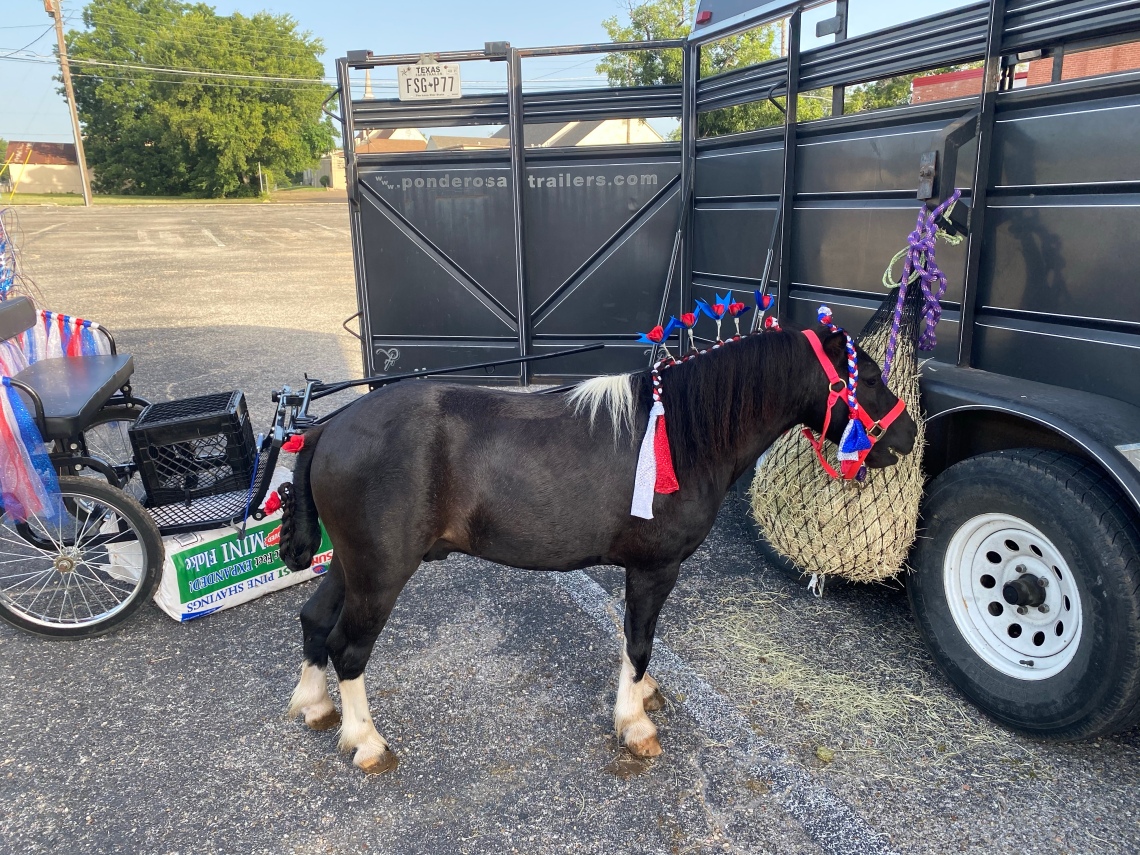 I was impressed by the number of citizens willing to participate in an unsanctioned event without the benefit of a police escort or blocked parade route.  An estimated fifty plus participants decorated themselves, their cars, golf carts, and bicycles.  While the parade audience was significantly smaller than usual, the number of people that came out to support the Citizen’s parade was impressive.  We followed the traditional parade route and even made the evening news!

2020 has become the year that wasn’t.  With the virus, economic shutdown, re-opening, mass hysteria, riots, mask requirements, and social gathering limitations, it feels like the earth has stopped turning and the pause button has been pushed on the entire world.  It was encouraging to see citizens willing to participate/celebrate the birth of this great country despite all of the negativity in the world.  During and after the parade, I had the overwhelming feeling that July 4, 2020 would be one of those days that would only grow in significance to me as time passes.  As with most important dates and events, the ending was rather anti-climatic compared to the preparation and lead up to the parade.  We returned to our trailer and waved at the participants that had been following us as they continued past heading to who knows what type of activities, hopefully a continuance of the celebrations maybe in the form of cookouts and fireworks.  Then we took a few last photos, and packed it all up. 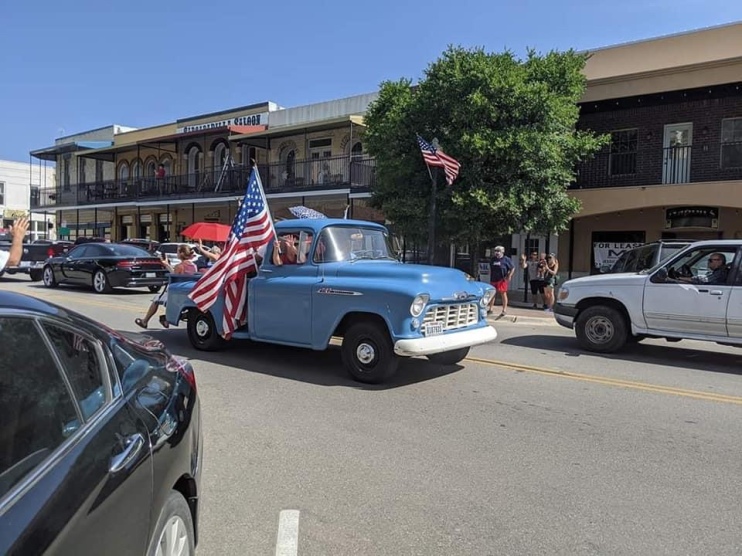 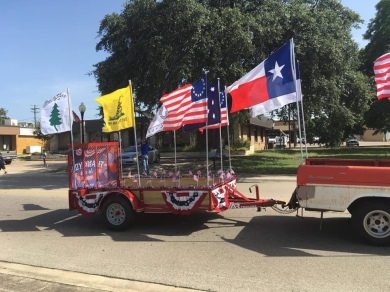 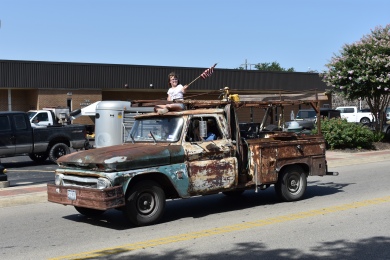 I don’t use the names of real people in my blog, but I still want to express my sincere appreciation to the individuals that organized the Citizen’s parade, the people that came out to watch, and my friend that is always up for getting her horses out and about.  If they are reading this post, they know who I mean.  Here’s to one of the most memorable 4th of July’s I have experienced, and it’s in no small part to you!

View all posts by M.L. Gardner